Tony Berger’s 21-yard field goal in overtime lifted the White team over the Red team 24-21 in the ninth annual Northeast Nebraska All-Star football game on Saturday afternoon at Memorial Field in Norfolk. This was the first time in the event’s history that the game went to overtime. The White team has now won each of the past four games and leads the series 6-3 overall.

“I feel very fortunate, happy for the boys. They played well,” White coach Kyle Schmidt of Plainview said. “I’m proud of them, and it was a lot of fun.”

Red got the ball to start overtime and gained a yard on first down. However, three straight incomplete passes, the second of which was an intentional grounding that backed the Red offense up to the 18-yard-line, gave White the ball with a chance to win it.

On White’s possession, Levi Belina of Howells-Dodge ran the ball each of the first three plays to bring the White team all the way to the 4-yard line on fourth down. That’s when Schmidt called in Berger, formerly of Cedar Rapids Riverside, to end the game with his leg.

It was a surprise for Berger, who didn’t expect his name to be called.

“I think all the other players on the team were kind of urging them to do it because they wanted to see us win on a field goal,” he said. “I didn’t think I was going to make it.”

Berger would have to make the kick from the right hash, something he hadn’t done before in his career. “My heart kind of dropped when the ball snapped and when I saw it go through, it was just like … finally,” Berger said. “It felt nice.”

“I would’ve liked to punch it in, but we had to get close,” Schmidt said, “because we knew Tony could probably poke it through there and he did.”

White entered the second half up 14-7 before Evan Haisch of Laurel-Concord-Coleridge tied it on a 2-yard touchdown run in the third quarter. On the first play of the fourth, Red took its first lead of the game following a 72-yard strike from Tanner Walling of Wayne to Matt Christensen of Pierce to go up 21-14 with 11 minutes, 47 seconds remaining.  Walling completed nine of his 18 passes for 202 yards and a touchdown while running for 51 yards and a touchdown on 11 carries. His performance was enough to make him the Red team’s offensive player of the game.

“He did an awesome job running the offense,” Red coach Troy Evans of Ponca said. “We’re going from double wing to spread to an I-formation and he picked it up all week and he did great.”

Charlie Schroeder of Wynot was Red’s defensive player of the game.

Quarterback Parker Krusemark of Stanton wasted no time trying to even things out. He led the White team on a six-play, 73-yard drive capped off by a 6-yard run for a touchdown.

Krusemark threw completed four of five passes for 65 yards on the drive. Three of those passes went for 61 yards to Carson Thomsen of Oakland-Craig, who had a bit of a rapport going with Krusemark before kickoff.

“We played last week in the Shrine Bowl, so we know each other pretty good,” Krusemark said. “We’ve always had to play each other in basketball. We’re both competitive, we just like to win so it was nice.”

Krusemark went 5 for 7 for 71 yards while running for 15 yards and a touchdown on seven carries to win the White team’s offensive player of the game award. Gus Gomez of Bancroft-Rosalie/Lyons-Decatur Northeast won the defensive honor.

Red marched deep down the field on the ensuing drive, eventually forcing a fourth and 1 at the Red 4-yard line. Walling took a bootleg to his left but was tackled at the line of scrimmage by Spencer Batenhorst of Wisner-Pilger, forcing a turnover on downs. Following the touchdown from Walling to Christensen, Schmit reminded his players that they still had work to do and wanted to see more results.

“We weren’t executing real well, but that was a credit to (Red) because they really picked up the intensity,” Schmidt said. “So we started executing better and started making a few adjustments and where we were going with the ball and things started to get a lot better for us.”

Neither team was able to do much the rest of the quarter, forcing overtime.

“You throw an offense, defense on them in four days, they come out, a couple of mental mistakes in there, but, all in all, they did what we wanted them to do,” Evans said of the Red team.

After scoreless drives to open the game, Belina got the scoring started with a 4-yard touchdown run with 3:03 left in the first quarter.  In the second quarter, Walling scrambled his way into the end zone on a 4th and 10 from the White 19 to tie it at seven. However, exactly one minute later, Cody Maricle of Boone Central put White back up with a 3-yard run across the goal line.

The White team took a 14-7 lead into halftime as a result.

Schmidt was impressed by the intellect the White team showed in the week leading up to the contest and over the course of the game.

“They’ve played a lot of football and they picked up on things really fast so it’s a credit to them,” he said. “They’re great football players. There’s a reason they’re here today.”

A banquet for the players, coaches, parents, officials, and Board is held yearly the night before the game.  This year’s speaker was Jay Bellar, executive director of NSAA. Both he, along with our Board president Jeff Bellar and head coaches Kyle Schmidt and Troy Evans, spoke to the players about life’s lessons and relationships formed and learned from the game of football. The meal was catered by First Choice. 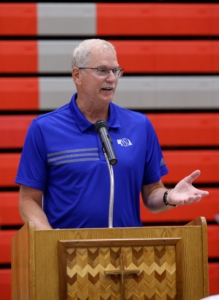 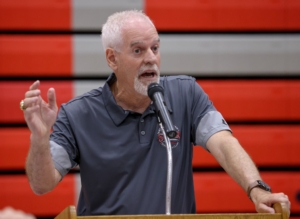 Jeff Bellar, President of the Board 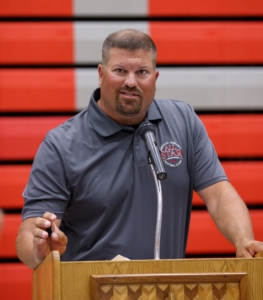 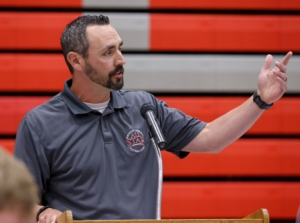 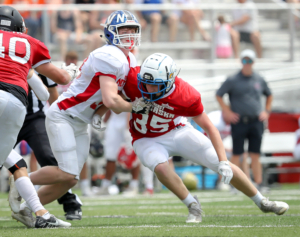 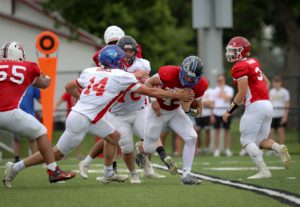 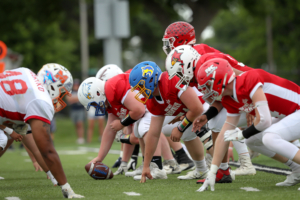 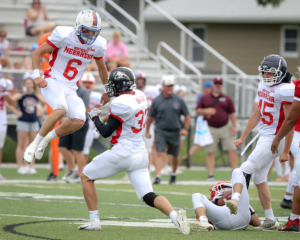 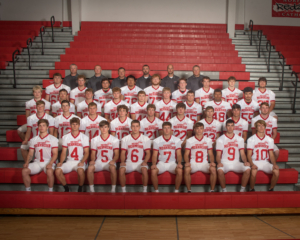 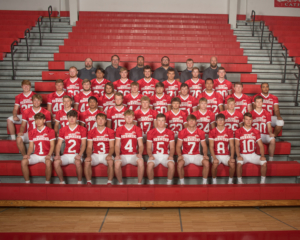