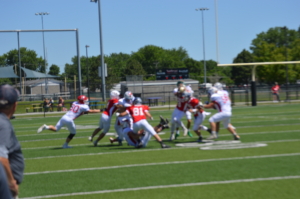 Mason Walsh of O’Neill threw a touchdown pass to Haustyn Forney of Humphrey St. Francis in the final seconds of the game and the White team beat the Red team 17-10 in the ninth annual Northeast Nebraska All-Star Football Classic at Veteran’s Memorial Field on Saturday afternoon.

As Red lined up to punt at their own 32-yard line with 20 seconds left, it seemed as if the game — then tied 10-10 — would be headed to overtime for the first time ever. Suddenly, Mason Bruggeman of Stanton broke through the offensive line and blocked the kick, allowing White to take over deep in Red territory.

The play was one that Red coach Steve Neptune of West Holt thought should not have happened. According to the All-Star Football Classic website, once the punter moves laterally (like one would for a rugby punt) linebackers and defensive backs may rush him. However, Neptune felt Bruggeman was not one of those allowed to rush.

“They had a guy come through that’s not supposed to and blocked it, but when you don’t practice it that way, then something like that happens, it’s just unfortunate,” he said. “But it’s an all-star game. Stuff like that happens.”

No penalty was called, and White took over at the Red 25-yard line with 16 seconds left. It might only have taken a couple yards to put Ryan Kramer of Boone Central in range to seal it with a field goal. However, White coach Dan Maresh of Bancroft-Rosalie/Lyons Decatur Northeast called for a deep ball to the end zone in hopes of ending things with a bang.

“You always want it to end with your offense,” he said. “You only get a week to put in that special teams. I’d rather see our quarterback go make a play.”

On the play, Mason Walsh took the snap and began looking for an open receiver. With the play winding down, he narrowed his options to Forney and Sutton Pohlman of Stanton. With pressure coming, Walsh moved to his right and found Forney, who leapt over his defender to make the game-winning grab in the corner of the end zone.

“I knew I had Haustyn in the corner, so I just kind of put it in the corner of the end zone because I knew there was a shot for him to get in, Walsh said. “Haustyn went up and made a great play and that’s the only reason that happened because he made a great catch.”

Things didn’t start off so smoothly for Walsh and the White team. After throwing an interception on fourth down to Rumen Rentschler of West Holt in the first quarter, Blake Brown of Wakefield found fellow-Trojan Nick Arenas for a 59-yard touchdown to put Red up 7-0 in the first quarter. In the second quarter, Alex Prim of Norfolk Catholic tacked on a field goal in the second quarter and Kramer answered with one of his own to make it a 10-3 game going into halftime.

Walsh threw two interceptions in the first half and was uncomfortable in the pocket early on. As the game went on, he became more confident knowing the teammates around him had what it took to make game-changing plays.

“I was a little antsy in the pocket in the first half,” he said. “But I got comfortable in the second half and realized how much time I had and was able to work around and help make some plays.”

Walsh had an opportunity to make one of those plays in the third quarter when, after a failed fake punt by the Red team, the White team took over deep in Red territory. On third down and 14 from the Red 32-yard line, Walsh found Pohlman on a post route down the middle of the field to tie the game 10-10.

On defense, Pohlman set a new All-Star Classic record with two interceptions, both of which came in the final 90 seconds. His last one was made on the final play of the game.

“It was an amazing moment, and I couldn’t be more happy to be with the group of kids I’m with,” he said regarding the play. “They’re all great kids and just had a great week with them and that was the cherry on top. Sealing the deal and getting the W.”

Peyton Matthews of O’Neill set a new record with a 58-yard punt.

Walsh, along with fullback Reid Korth of Wayne, were both named “Best Teammates” for White and Red, respectively.