The Board of Directors of the NEN All-Star Football Classic presented three awards at the game on Saturday, June 12, 2021.

Rod Bummels of Osmond received the Lifetime Achievement Award and Randy Hagedorn and Joe Tjaden, both of Norfolk received the Contributor Awards. 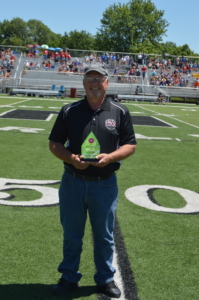 Rod Brummels is a 1971 graduate of Clearwater High School.  He attended both the University of Nebraska-Lincoln and Wayne State College. Upon graduating he returned to Clearwater in the fall of 1978 to begin his teaching and coaching career.  During his 31 years at Clearwater, he served as an assistant football coach for his first three years and then took over the reins of the program for 27 years.  His last year at Clearwater he co-coached the first year of the Clearwater-Orchard OC Cyclones.  From there he moved to Osmond and served one year as an assistant before taking over the football program for seven years.

After retirement from teaching, he served as an assistant at Humphrey-Lindsay Holy Family for one year, Pierce Public Schools for two years, and is currently an assistant back at Osmond.

During his coaching tenure he also logged 27 years as an assistant high school basketball coach with 20 of those at Clearwater. In 2011 he was blessed to be a part of the Clearwater Basketball program that was inducted into the Nebraska High School Athletic Hall of Fame as a Dominant Dynasty.  He also coached track for over 20 years either as a head coach or as an assistant.

He served as the president of the Nebraska 8 Man Football Coaches Association for five years.

Rod’s family consists of his wife, Jane, his four children: Seth, Josh, Sydney, and Morgan, and his 11 grandchildren. 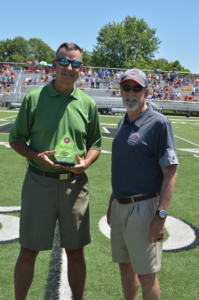 Randy Hagedorn has worked at the Norfolk Family YMCA for 37 years, the last 23 as the Executive Director. He led a $14,000,000 capital campaign to expand the current facility. The new addition opened in 2014. The current facility is now 181,000 square feet.
He graduated from West point CC High School, attended Northeast Community College and then Dana College. He participated in college basketball for 4 years and then coached college basketball for 5 years. He is well known as an area official. He has officiated high school basketball and football games for 38 years, working numerous football playoff games and 5 state championship games. He has also worked numerous district basketball games and has worked 16 state tournaments. He has officiated the Northeast Nebraska All-Star Football Classic, the Shrine Bowl, the State All-Star basketball game, and Northeast Nebraska All-Star basketball game. He has also worked numerous college basketball and college football games, including playoff and championship games.
He has been married for 30 years to Patti who teaches and coaches at Norfolk Junior High. Their children are daughter Breanna who coaches and teaches in Lincoln, son Tyler who is playing pro basketball overseas, and son Matt who plays basketball at Doane College. 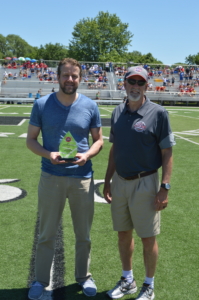 Joe Tjaden is a graduate of Ft. Dodge Senior High, Iowa Central Community College, and Iowa State University.  After radio stints in Iowa at Ames and Webster City, he came to Norfolk in August of 2000 as the Sports Director of 105.9 WJAG/97.5 KEXL/106 KIX.  The award that Joe received that he is most proud of is from September, 2009 when he was presented the ‘Contributions to Athletics and the Youth of Our Community Award’ from the Norfolk Coaches Association.  He commented “It’s been a blast over the last 20+ years being honored to cover these athletes, playing the game they love, and building relationships with Northeast Nebraska coaches.  This acknowledgement today, would not be possible without his crew members he has worked with over the years.  It’s hard to say so much…… in so little to so many,….But, if a man can be judged by the friends he keeps, I must be the luckiest guy in town.”